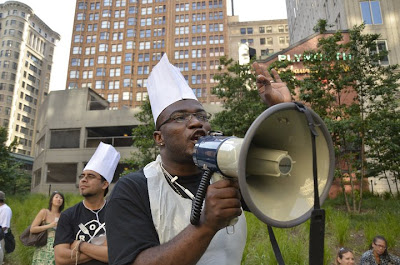 Why is the Middle Class in the United States of America on the endangered species list?

Many economists argue that the global economy and the flight of the “good jobs” aka manufacturing is to blame. And, according to them, this economic phenomenon is inevitable. However, manufacturing jobs didn’t start off as good jobs. People forget that thousands of people died in early industrial plants, and the survivors, including child-laborers, toiled under unbelievably oppressive conditions at some of the lowest wages imaginable. Then workers organized and that changed the game.
The middle-class in this country is a direct result of an organized and powerful working class that was able to collectively improve working conditions and raise wages. So the relevant question of today is, are the service jobs, particularly the jobs in the restaurant industry, inheritily bad jobs?
Related Posts

Oh, McDonald’s – Thanks for Proving How Totally Inconceivable Living on Minimum Wage Actually Is

As you may have heard by now, McDonald's partnered with Visa to provide a budgeting…