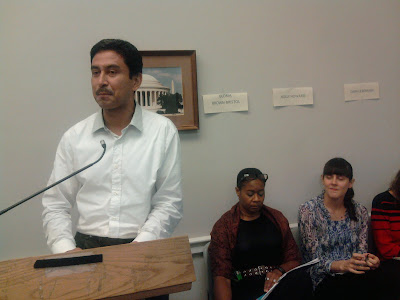 On September 30, 2010 Restaurant Opportunities Centers United released “SERVING WHILE SICK,” the largest- ever study of the health conditions of restaurant workers based on over 4,300 surveys conducted in cities nationwide, including New York, Miami, Chicago, Detroit, Los Angeles, New Orleans, and Washington D.C. 90% of workers reported that they did not receive paid sick days. 90% of workers reported not having health insurance through their employers. As a result, 63% reported preparing, cooking, and serving food while sick. The report, Serving While Sick: High Risks & Low Benefits for the Nation’s Restaurant Workforce, and Their Impact on the Consumer, demonstrates that a large majority of restaurant workers lack paid sick days and employer-sponsored health insurance, and thus two-thirds reported cooking and serving food while sick, with dramatic impacts on the consumer. Click here for the Executive Summary.

A New Direction for Restaurant Workers? Zingerman’s and the “Thriveable Wage”

Restaurant workers everywhere, whether you were one of the hundreds that came to the 2010…