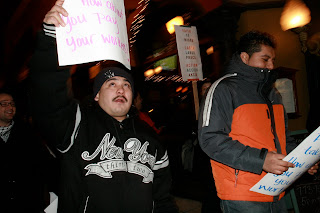 News from the capital of the Mid-West, Chicago.

“To negotiate or to stall, that is the question”
Owner of Ole Ole claims to be working with CHI-ROC, yet won’t come out to speak.
First, I’d like to begin with a brief little history of Ole Ole and why we chose to pursue this campaign. Ole Ole is a small restaurant with about 11 workers, back in December we were approached by workers who had reported wage violations. After meeting we realized this was a Fine Dinning establishment, in the very progressive Andersonville neighborhood, with the possibility to impact the entire Chicago restaurant industry. For the next two weeks CHI-ROC was able to organize more workers and decided to pursue the campaign.
Now it’s time to get you up to speed on the Workplace Justice Campaign that CHI-ROC began back in December.
Dec. 11th: CHI-ROC and Supporters Drop off demand letter
Dec. 15th: Ole Ole retaliated to one of the workers by dropping his shifts from 6 to 1
Dec. 16th: CHI-ROC responded by handing out fliers in Andersonville area and in front of Ole Ole. We were greeted, very quickly, by the owner and Chicago Police.
Dec. 18th: ROC filed retaliation charges with the NLRB (National Labor Relations Board) and scheduled first protest, but Ole Ole’s owner called 1 hour prior to deadline for negotiations.
Dec. 21st: Both parties meet and agree to set negotiation dates with attorneys present.
Dec. 23: Ole Ole owner admits to owing at least 80,000 dollars to 4 workers
Jan 4th: Due to lack of response, CHI-ROC sends letter to Ole Ole to sit down and negotiate
Jan 5th: Still no call, CHI-ROC responds by setting up Jan 6th deadline and if not met, a Protest would ensue.
Jan 6th: After missing the 3:30pm deadline, CHI-ROC organizes membership and fellow organizations for the 7:30pm protest. One hour prior to protest, Ole Ole Owner sends text! She was about to sign a retainer with a labor lawyer and had responded to the NLRB. Because of the progress we decided to proceed amicably. Members marched over to Ole Ole to inform the Owner that we would not protest, but did want to warn future missed deadlines would have consequences. To all of our amazement the owner would not come out- Protest followed.
We will continue with weekly actions until a we reach a solution.
Related Posts

On February 13th, in honor of Valentine’s Day -- the busiest day of the year…

Living Off Tips and Sexual Harassment

This Friday, celebrate the momentum of our national policy campaign, One Fair Wage, over a…